Yaakov Hoter, founder of the Swing de Gitanes band, has collaborated with world‐renowned musicians such as Bireli Lagrene, Martin Taylor, and others.
He has performed in major international festivals in Israel and abroad, including the Jazz festivals in Eilat and Tel Aviv and the great Khamoro Gypsy music festival in Prague. He has three albums to his name and has participated in many other albums.

Yaakov Hoter’s website ‐ gypsyandjazz.com ‐ has thousands of followers from around the world and he regularly holds international guitar retreats in Italy.

My love of music began in my childhood and is still going strong.

When I was 13, I took up the guitar and my brother, Azriel, immediately taught me my first blues and also gave me a Django Reinhardt cassette along with a large collection of records from a lot of styles. I remember spending hours listening to those records, trying to catch that magic energy that I felt from some special tunes, tunes in many different styles. The magic that  I felt as a child is the secret that I’m still  looking for today.

That first Django cassette played a big part in my life. Django’s music ignited a spark in me that has become an eternal light guiding my way to spread his breathtaking music, learning, performing, teaching in person and online, and developing a guitar to get the precise sound I’d been longing for.

Over the years, I have also been involved in a vast range of styles – the blues, rock, fusion, jazz, Indian, Balkan, Arabic and Irish music, et al. – all of which have influenced me and helped me create my own style.

My formal music training was at the Rimon Music College and at the Jerusalem Music Academy.  My professional adventure includes performance with a variety of bands and personalities in many styles.  I have also written music for the theater, composed songs, written lyrics and taught music.

In 2006, I had the great good fortune to meet and play with Jon Larsen and Walter Clerici in Denmark.  That really gave me the push I needed to devote myself to Gypsy swing, leaving other endeavors by the wayside.  I immersed myself completely in learning the Gypsy swing style for two years. I travelled to Europe, studied with the acclaimed master Gypsy guitarist, Fapy Lafertin, and jammed with, and learned from, such Gypsy swing guitar greats as Bireli Lagrene, Stochelo Rosenberg and Moreno. 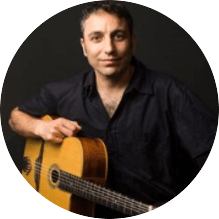 With persistence and the right methodology and techniques,
you can become a gypsy and jazz master.

For me, music is a spiritual thing. I can’t see it or touch it. But I can feel it and be in it. Music is a longtime relationship. I can feel it close, embracing, cheering and loving. But I can feel it far, strange and cold, just the same. Music is like a huge universe that we can describe as a lot of angels, each showing us different things. The way I live and learn music is a mirror to my soul and psychology. How do I handle difficulties? How do I link myself as a person to myself as a musician? Can I represent myself without music?

My unceasing search to get closer and learn music gave me a lot of insights that I just wanted to share because I can recognize what  I’ve been  going  through in other musicians as well.

I had teachers whose own vision of music was so complicated that it made me sad, feeling distanced and cold. I had to find those cheering angels, who were simple and fun. Once I found them – I had to share them. Those angels I find are the reason I love to teach. They are the cornerstones of my teaching.

Developing a new generation of Gypsy swing guitarists in Israel is important to me. That’s why I give private lessons and workshops here and why I developed a curriculum for teaching the style at the Rimon School of Jazz.

I truly believe that my mission is to spread my knowledge, based on my own personal learning experience and give help to everyone who wishes to learn, know and enjoy performing Django’s music and jazz guitar in general.

To that end, I started an online music school back at 2011 and it attracted quite a devoted following.  It has now evolved into Gypsy and Jazz.com, where I have found a place to where all my knowledge and provide help to as many students as I can.