Winning Improvisation Structure #2 – The Blues and Coquette via Melody

Posted at 04:38h in blog by Yaakov Hoter 2 Comments

The blues is divided naturally into 3 four-bar sentences. The melody is played on the first two bars of each sentence and then it stops for bars three and four. The third and last sentence is the same as the first two, but it has also an ending.

Here is a simplified chord sheet showing the place of the melody.

Basic Structure of Blues for Ike

When you learn the melody, notice how, in the second sentence, the melody adapts itself  to the chord and the C# that is part of A7 changes to C to fit in with D7.
Now, try to improvise within that form yourself:

Blues for Ike Structure with Fills

See how keeping to a structure makes your improvisation interesting.
Then, experiment with getting away from the structure for a while and then going back to it. Play with this idea and implement it over other songs as well.

In Coquette, the structure of the melody is a little bit different. You have the first sentence, that ends with a motif, which repeats at the beginning of  the second sentence, and then there’s an ending.

Coquette – The Structure of the Melody

Improvise over the song using this structure.

Start by playing very simple sentences. When you feel comfortable with it, you can add your licks, scales and arpeggios. You can improvise freely over the B-part and go back again to the structure in the last A-part, to make your improvisation more varied.

Try to experiment with this idea with other songs as well.

Enjoy! And don’t forget to leave your comments below. 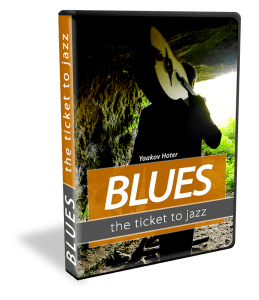