ONE DIMINISHED ARPEGGIO TO RULE THEM ALL – HOW TO IMPROVISE OVER A CYCLE OF DOM7 CHORDS – Mr. Sandman

27 Dec ONE DIMINISHED ARPEGGIO TO RULE THEM ALL – HOW TO IMPROVISE OVER A CYCLE OF DOM7 CHORDS – Mr. Sandman

Posted at 04:57h in Uncategorized by Yaakov Hoter 0 Comments

One Diminished Shape to Rule them All

Learn how to use the power of the descending chromatic diminished progression over a very common cycle of Dom7 chords that you can find in many jazz songs, including Mr. Sandman and Sweet Georgia Brown.
This is an idea that you can implement over many tunes and you’ll also get a very cool lick that doubles as a great technique exercise.

Here is your chart for Mr. Sandman in the key of Bb:

After the intro, the song begins with a Bb chord and then goes into a sequence of dominant 7th chords in the cycle of 4ths (this chord progression is common in traditional jazz and often used as the B part of swing tunes). The sequence begins with an A7 chord followed by D7-G7-C7 and F7 which leads us back to our tonic of Bb major (in the first ending only).
Now, you’ll see how you can use a single diminished arpeggio and move it chromatically to play a musical concept that crosses over this entire progression of secondary dominants.

The Tension of the Dominant 7th Chord and the Diminished Chord

Both dominant 7th and diminished chords function as dominants; they create tension seeking to resolve to a tonic.

Here is why replacing the dom7 with the dim7 works so well:
If you omit the root of a dominant 7 chord, you’re left with a diminished triad starting from its 3rd degree.
If you add the 7th to that diminished triad, you get a Dom7b9 chord without the root on top.
For example:

Diminished triads and diminished 7th chords are symmetrical; the interval between each chord tone of a diminished chord  is 1.5 steps. So, it doesn’t really matter in what order you arrange the chord tones; the color of the chord will remain the same and, in fact, each “inversion” of the diminished is a root position diminished chord.
Here’s an example:

Let’s See How You Can Use This for Mr. Sandman

One Lick to Rule Them All

This lick is simply an embellished arpeggio based on the diminished 7th chord, yet it carries a lot of energy, especially when you move it chromatically.
Here is one version of this lick where the shape starts on Bb which is the b9th degree of A7:

Because the diminished chord is symmetrical we can start playing the lick from a different
inversion to create a slightly different effect.
Let’s play the same lick starting on E  – the 5th degree of A7: 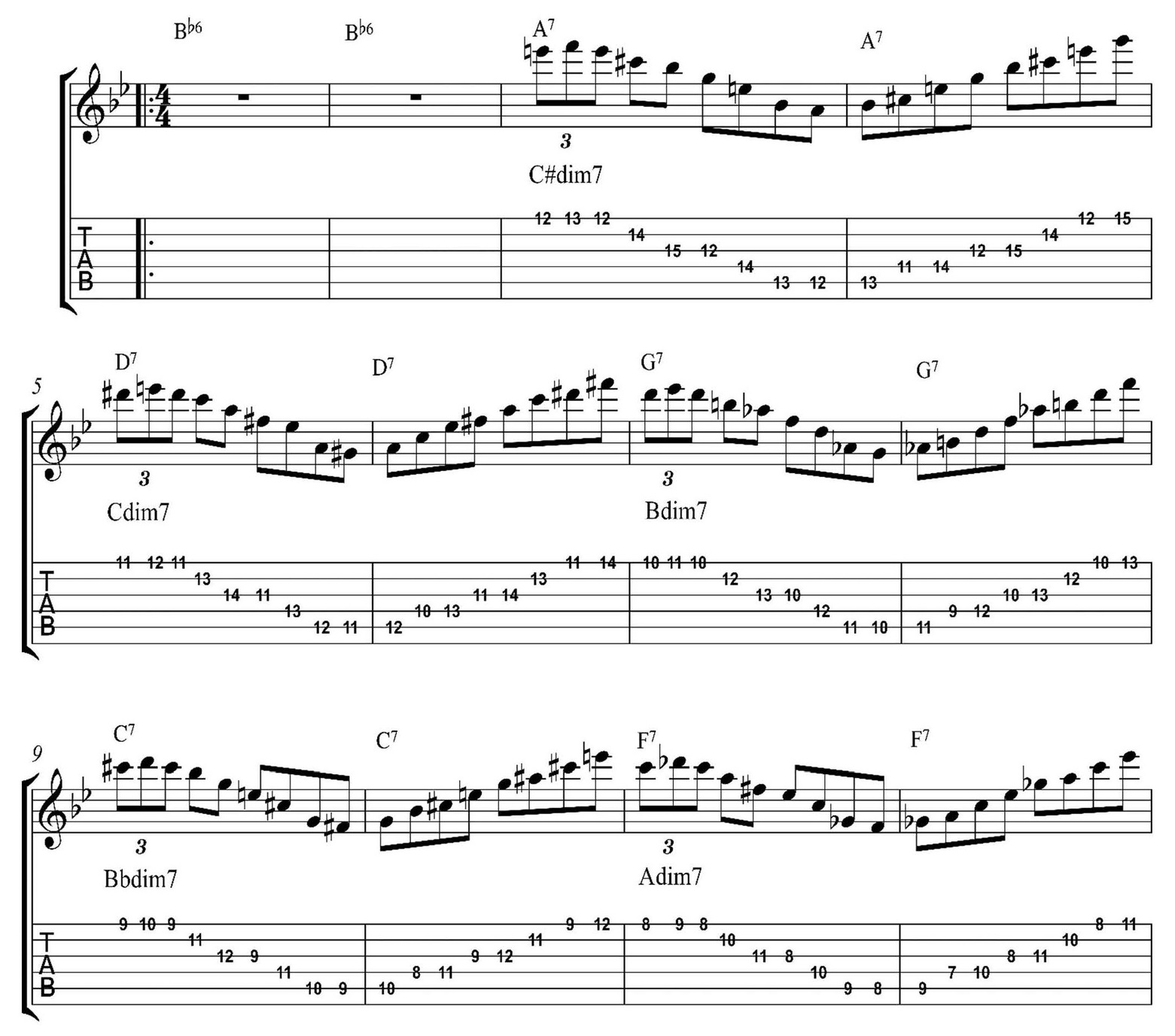 Try playing this lick from G or C# (the 7th and 3rd degrees of A7) and see how you like it. Play around with the diminished arpeggio shape and see what variations you can come up with. Then just move your own lick chormatically like I did or change the pattern for each chord.
Allow yourself to be creative in your diminished shape playground!
There are so many original and exciting variations you can come up with using the diminished chord now that you know the secret of its symmetry and its relation to the Dom7 chord.

This is Also Sweet with Sweet Georgia Brown

Since Sweet Georgia Brown also has a cycle of secondary dominants just like Mr. Sandman, it’s great for the idea you just learned.
Here is the chart for it in the key of G major: 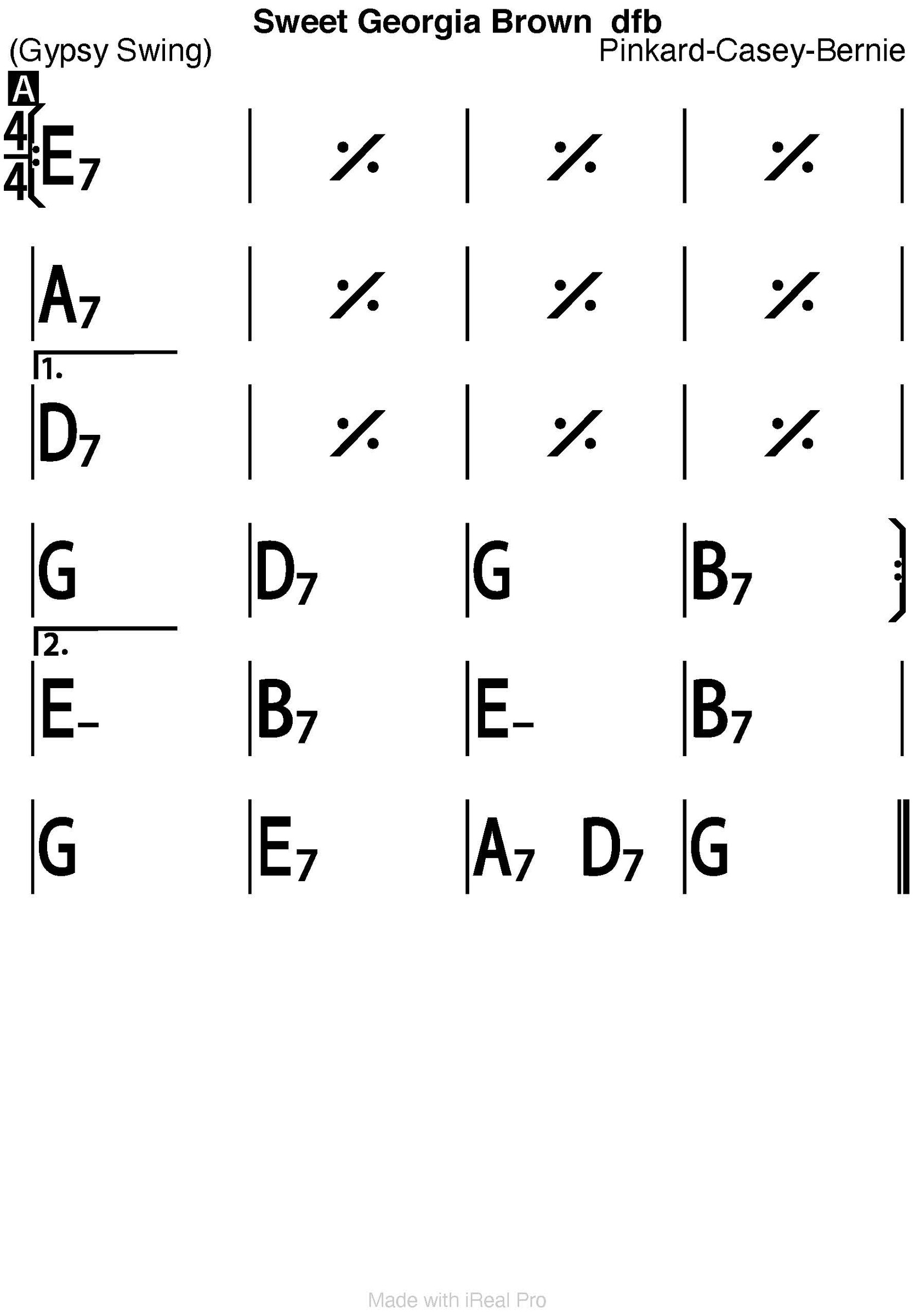 Now practice improvising with this concept over other songs that have a cycle of Dom7 chords and RULE THEM ALL!

How about sharing what you come up with?