Posted at 16:10h in blog by Yaakov Hoter 0 Comments 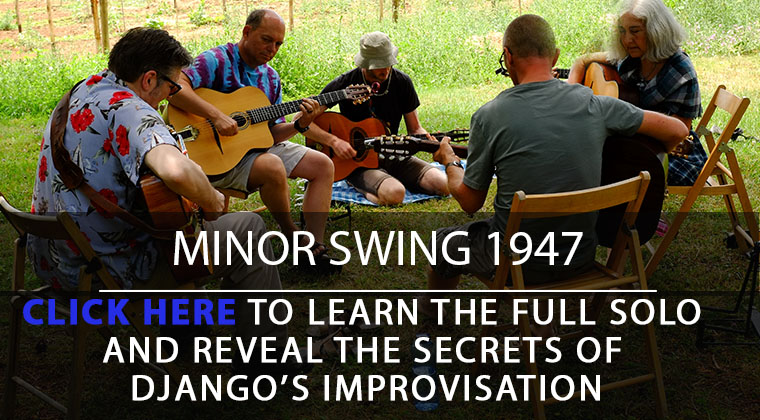 In this lesson, you’ll learn the octave part in Django’s 1947 Minor Swing recording and you’ll find out how learning Django Reinhardt solos note-for-note is a springboard to creating your own stunning octave solos and beautiful structured improvisation.

Adding a structure to your improvisation is one of the most important and musical things you can learn from Django Reinhardt’s way of  improvising jazz. It is amazing how his solos are organised in sentences with repeating motifs and ideas.  Enjoy!

Playing octaves on the guitar

0:54 in the video – a short overview of the technique of playing with octaves striking all the strings but muting the ones you don’t need.

Organizing your improvisation in a structure

Django structures his solo in two two-bar phrases and one four-bar phrase. Once you know the solo as is, you’ll learn to make your own variations using the octave technique and sticking to that same two-bar, two-bar, four-bar structure.  You’ll find that the structure is very effective with single note solos too. Even simple solos based on triads become much more beautiful when placed in a structure. Copying the structures Django Reinhardt uses is a great strategy for learning to improvise.

After you learn Django’s solo by heart, you’ll want to play around with it, creating your own simple variations. When you can create variations to a musical part you play, it means that you really understand it and that you can implement the musical idea deeply, changing it to create new phrases each time. Here are a few examples of how to create variations to Django’s octave solo part: 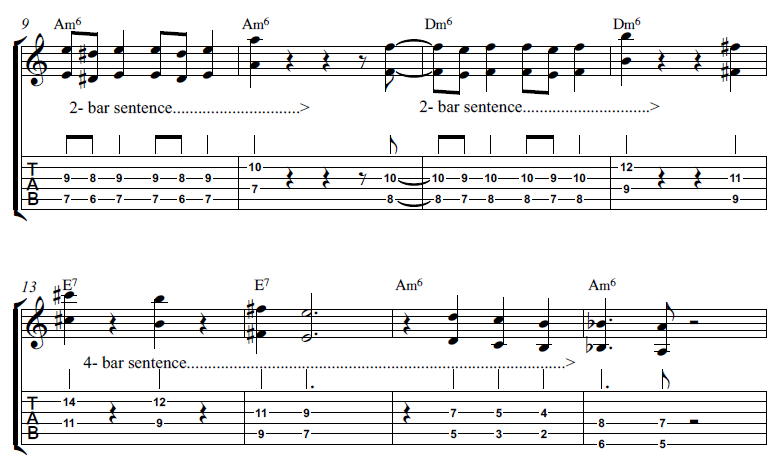 After you master the solo, it’s time to implement what you’ve learned, to really improve your improvisation skills. Let’s start with example over Minor Swing:

Minor Swing – Implementing this idea, example at 10:00 in the video:

Now practice improvisation with the same structure of two-bar and four-bar phrases over other songs, with octaves and with single notes. Organizing your improvisation in this way always sounds good.  If you get used to it, you can use it to improvise effectively over any song. Once you have some simple skills, you can play beautiful solos if you have a structure in mind, rather than just coming to each chord and wondering what to do with it.

Blues in G – Implementing this idea, example at 11:45 in the video: 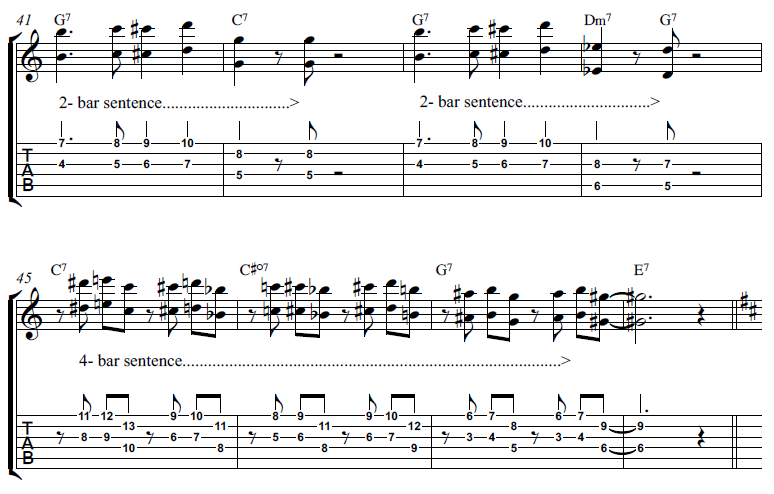 Implementing this idea over Coquette:

Over Coquette, you’ll see how effective the same structure can be with a simple single-note solo, as well as octaves.

Django Reinhardt’s 1947 recording of Minor Swing is a treasure trove of techniques, ideas and inspiration that is worth spending a lot of time with.  Learning it will improve your technique and give you more effective improvisation strategies. In the full course, you’ll learn the complete solo, expand your improvisation tactics, extend your vocabulary of licks and improve your technique. I guide you every step of the way to make sure you get the most out of it in my full Minor Swing 1947 course from GypsyandJazz.com.

Check it out here-